Lessons From The Classroom - Money Matters

This fall Josh and I started giving our kids an allowance.  Now, don't laugh at the amount, it's the lessons that matters, right?  Right.
We give Areyna and Zeke $1 in dimes every month.  Go ahead and get your giggles out... 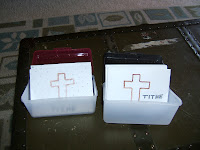 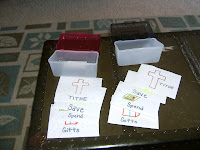 Okay, focus...so we have implemented the "envelope system" with the kids.  I know my parents taught me this at a young age and I am pretty sure that Josh's parents did this as well for them.  Now, I wasn't the best at the envelope system growing up.  It was WAY too easy to "transfer" money between "accounts", if you know what I mean.  But enough about me, let's focus on my kids shall we:)
We went out to the store together at the beginning of the fall and they picked out a filing box that would be their "bank".  We then made envelopes for the following to put in each of their boxes:  "Tithe", "Savings", "Gifts" and "Spending".  Every "payday" we sit down and count out their money and put 1 dime in the tithe, savings and gifts envelopes and the rest in spending.
A couple of weeks ago I was running errands with Zeke and Areyna and I promised them a walk through the toy section.  They know that when we do this they are not allowed to beg me for toys or throw down an attitude because we aren't going to buy them something.  But this day, they both found things in the store that they had been eyeing for quite some time.  They both asked at one point if we could get it, and as usual, I told them that they could save their money for it and when they had enough, we could certainly come and get their desired toys.  They didn't put up a fuss or complain about not being able to get it right away...
I knew that a "payday" had gone by and I had yet to divy out their funds.  So, when we got home I told them it was "payday".  They were SO excited as they ran to go get their little bank boxes.  After they divided out their money in their envelopes we decided to count the money that they had been saving up in their "spending" envelope.  They always talk about what they want to buy, but then forget about it until the next payday so they hadn't spend any money yet.
I remembered how much each of their desired toys cost from the store and we figured that they had each saved enough money to make the purchase.  (We added a little of their Christmas money to make up the difference).  They were THRILLED!
So, we went to Target, found the toy they had set their hearts on, found a Christmas present they could buy for Micaiah together with their "gift" money and went to check out.
I made sure to preface our purchase with "We've got a lot of change for you today:)" 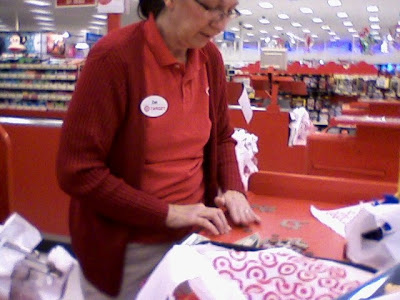 Our cashier was more than kind as she counted out their money, and the people behind us in line cheered for them as they waited patiently to receive the toys that they had been saving for. 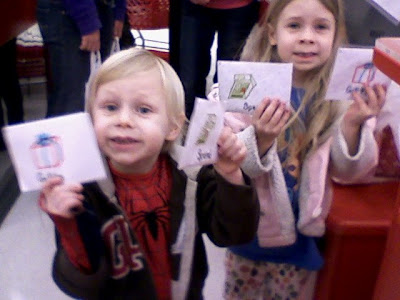 Both Areyna and Zeke have been so thankful and grateful for these specific toys.  They play with them DAILY and tell us how much they love their new toys.  I think they value them because they were able to buy it themselves.  They worked hard for them.
I'd love to know how you teach money issues to your children!
Posted by The Via Colony at 12:35 PM

I want to know what toys they saved up for...can you include that on your blog?

Way to go Rainy and Zeke for learning to be wise with your money! I am so proud of you!

Love this! Matt & I want to know when we can start taking parenting lessons from you & Josh and Smooth & Kelly. :) We love you guys, hope you are feeling better!

I have never heard of this system, can you maybe explain it in one post for those of us who do not know this?

Sure Elizabeth, I'll do a post on the Envelope system:)