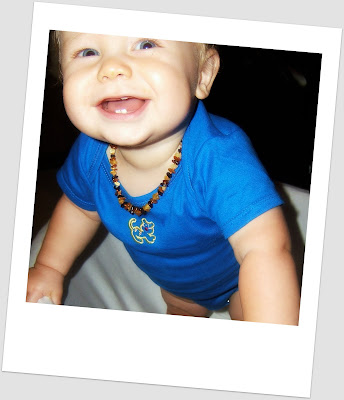 Many of you have asked about Cai's little necklace he's been sporting. I have intentionally neglected to respond because I wanted to give it some time.
So, for all you curious readers out there, let me shed some light on the subject. I think I've given it enough time;)
Micaiah had just completed a second round of antibiotics (that is 20 days of drugs ya'll) for severe double ear infections when we found out that he is allergic to Penicillin and the doctors wanted to get him on yet another antibiotic because his infections persisted.
Not only was he in pain from his infections, but he was teething as well. This kid's teeth take FOREVER to come through the gums and he had been miserable.
On top of that he has still been battling his enflamed lungs which make it difficult for him to breathe.
Then, I read THIS BLOG by my friend, Rita. She had just gotten an Amber Teething Necklace for her daughter. My first reaction to stuff like this is a, "Yeah right" and then I roll my eyes. But she had been reluctant to tell anyone because she wasn't sure if it was really going to work. It did for her!
This necklace reminded me of another friend who had gotten each one of her kids one of these amber bead necklaces for their allergies. She swears by those necklaces.
So, now I was really curious, and like I said earlier, desperate!
I did a little research and then went on Etsy and ordered one for Cai. I felt like it couldn't get here soon enough!
The day it came in the mail I put it around his neck immediately. (He wears it 24/7 and NO I'm not worried that he'll choke or that he'll break it. He doesn't even play with it and each bead is individually knotted on the necklace so if it were to break only 1 bead would be loose.) Four days later I still hadn't seen a change. I had been giving him garlic oil ear drops religiously every morning and hadn't taken the necklace off once, but still no change. He was still fussy and clingy. I was about to give in and go pick up his antibiotic from CVS (who were very good about calling me to let me know they were irritated, I mean, uh, to remind me that it had been sitting there for almost a week).
On day five we had a break through. He wasn't fussy. He sat on the floor and played all by himself. He laughed. He wasn't tugging on his ears. He was eating normal meals. I had my happy Micaiah back. It was awesome.
He had another tooth break through on his top gums a week or so ago and I think another one will pop through in the next couple of days and he's been great!
Here is what the Amber Beads are supposed to do:
reduce teething pain
reduce skin rashes
reduce eczema
reduce respiratory problems
improve sleep patterns
settle children
Now, I'm not saying that this necklace has cured everything, but I can tell you that the combination of the garlic oil drops and the necklace has greatly effected Micaiah's appetite, mood, and overall character.
So, if you are just waiting for another confirmed, "Yes, it works", from a friend, you've got it!
Posted by The Via Colony at 11:51 AM

I've always heard the beads help with teething, but never heard about it effecting respiratory issues. I might have to give them a try for both boys.

Thanks for letting us know. I thought it might be to help his ears and/or teething. I have to say, though, I think it's so cute on him, too. Very glad he's feeling better. That's a lot of antibiotics!

Amber is incredible and unmatched in its natural healing powers - and not just for children. People have used amber for centuries for arthritis, respiratory infections including chronic asthma, as a stress reliever that interacts with the body's nervous system and much, much more. Researchers and scientists have expounded on the exceptional ability of Baltic Amber to thwart infection and enhance immunity. Today, everyone is turning more toward homeopathic medicines - Amber is at the top of the list in it's healing abilities. Do you own research and you will amazed at what Baltic Amber can do.http://www.amberartisans.com/

Hey Tasha, this is Victoria W. I was wondering how exactly do they work? Are they safe? Any info you could give me would be great.

They are totally safe. It's not something they chew on or anything. It's just a necklace they wear. It's the body heat that reacts to the amber that gives the soothing effect. There are no side effects, it's just a type of bead.

You could check out http://www.amberartisans.com/
b/c he seems to explain it pretty well.

Just Purchased Mine! Izabella has turned into a loud little diva these days, and I am just praying these will help. I can't seem to find anything to calm her down these days (other than swimming). Thanks for the update!

This is good to know. I haven't had any problems with infections so far but my son has recently developed some bad eczema. Maybe this would help.