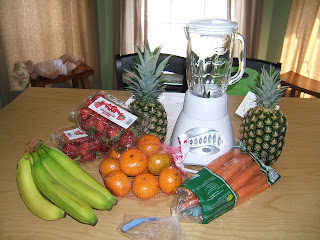 ***This is for you Jennifer McMurray=)  Don't go buy that Juicer just yet...
When we went over to Wes and Jenn's house last week Jenn and I talked the majority of the day about a health food class she had just attended.  I had a MILLION questions and Jenn answered just about every single one of them.  I learned so much (seeing as I hardly have a grasp on the difference between organic, all natural, etc.) and am now motivated more than ever to try my hardest to eat healthier and buy better food for my family while still maintaining our grocery budget.  We both decided that there has to be a good balance between the two.
Here are some things I am going to try to implement into our diet:
Jenn and I were also discussing the thought of buying a juicer.  So, I decided to give my blender a go at it before purchasing a juicer.  So, I went to Aldi and racked up on all these fruits and veggies for under $10 to start making healthy smoothie snacks.  (Just for a comparison, I had gone into Harris Teeter earlier in the week and just 1 pineapple was $4.99!!! {$1.89 at ALDI})
I've already made 3 Large smoothies and still have TONS of fruit and veggies for several more.  It tastes GREAT and it gives me just as much of an energy boost as a soda or cup of coffee in the afternoons.
Now I know that we've all grown up fine eating these foods, but I figure with us being on the road and having to eat whatever is offered to us (usually pizza and fast food) that I'd try to stay as healthy as possible when we're at home.
So, here's what I want to know...
How do you maintain a balance of health and budget with your family?  Any ideas on some healthy habits to incorporate into our diet?  I'd love to get some feedback as I'm pretty ignorant about this topic=)
Posted by The Via Colony at 7:19 AM

I am so proud of you, Tasha. You will notice a big difference in how you feel and probably even your budget. We started doing that a long time ago and really it's not much more expensive (if at all) if you do your research. Here are a few things we do (I could write a book on it ;):
1)I buy all my spices and baking ingredients in bulk at healthfood stores. It doesn't have all the added aluminum and preservatives.
2)Milk is hormone free at Ingles too.
3)Raw sugar is an excellent deal at WalMart.
4)Make stuff from scratch and serve foods in the raw stage. Lots of salads and yes, smoothies are awesome!
5)I even steer away from the dried fruit bc it has a lot of sugar and is a major cavity culprit.
6)Water is good to drink with snacks/meals. When we have tea, I sweeten it with local honey.
7)We eat a lot of dried beans/lentils cooked in the crockpot. You can do all kinds of stuff with that.
8)Lots of plain yogurt with fresh fruit is eaten in our house for snacks and desserts.
9)The farmer's market is also a great place for produce and kids love going there.
10)We don't eat a lot of red meat.
11)If you have the time and energy, planting a garden in the summer is a great way to cut down cost and get fresh yummy veggies without going to the store. Herbs are also easy to grow and fun to use in cooking and making teas.

You will be surprised at how easy it will be once you get a feel for it. It helps to sit down and write it all out too. As far as organic, we can't afford all organic stuff but avoiding processed foods, hydrogenated oils, and high fructose corn syrup is a big step in the right direction.
I hope this journey is fun for you and keep me posted on how it goes!

Do you have a Trader Joe's nearby? They have great prices and offer much healthier choices - whole grains, no HFCS, and lots of tasty things. I spend about $50/week if I shop at TJ's. Our is in Mass, about 1/2 hour away, so I only go down there if I have another reason to be down there. I now work 1 day a week down there, so I'll be going more often. They also have good, cheap sushi if you like sushi:) :)

We do smoothies a lot in warmer weather too. I use plain Stonyfield yogurt, frozen fruit (its cheaper a lot of times), and then sprinkle in some ground flax seed. Delicious!

I need to get healthier again, I've been slacking.

We also do lots of beans and rice dishes as it is cheap and good for you.

Its also easy if you buy salad stuff, get a big bowl with a cover, make a huge salad and then be able to eat it all week.

Hummus - we love it! (Well Morgann and I.) She loves dipping veggies in hummus. We buy ours, but making it is easy if you have a food processor.

Great feature on 60 minutes last night about Alice Waters and her impact on how we eat.

Good for you. Your kids will be much better off learning this at a young age.

One word---Kashi. I genuinely like the way their food tastes. And you can get it from any old grocery store. Their products probably aren't 'budget friendly', but I use coupons/MVP/etc. to get them. I'm into their frozen foods b/c it's perfect for the college lifestyle. I bet you could find healthy snack options from them and get it with a coupon or special deal!

Next post....smoothie recipe. I need to do this as well for my family. So maybe if I start off small with smoothies, that will give me some added motivation to do better!

As far as eating fast food, there's a book called "Eat This, Not That" -- it goes through the major restaurants and lets you know the healthiest options there and the unhealthiest...it's been helpful for us when we can't avoid fast food but still want to make a wise choice. :)

Charlotte has a Trader Joes!! I have been researching this way of eating for a few months now and we have made some really slow and easy changes! kellythekitchenkop dot com is a great simplified website and then you can link from there to lots of good reads! Read her "Rookie Tips". I refer to these a lot. How fun! I get overwhelmed sometimes and some weeks are better than others, but we stick to a few basics always and it has really helped!! If we ever see each other again, we will have lots of fun things to talk about ;)

I just posted a comment on someones blog about Whole Wheat ..ironic :) We have smoothies all the time..and Ethan loves them :) hope you loved the picture I sent you :) have a great Monday!!

Great stuff, Tash. We aren't to the place of feeling like we need to go organic, but I am constantly trying to figure out how we can eat healthier. I try to spend as much of our grocery budget as I can on fresh fruits and frozen veggies. I've switched from the wal-mart brand of frozen chicken to tyson's (it's hormone-free). One thing about whole wheat is that for it to be really heart-healthy it also needs to be whole grain. We sometime buy the Sara Lee Soft and Smooth White that is whole grain...as far as I know, this is still good for you if you really want white bread. (I can't handle wheat bread when I'm pregnant!) Anyways...Good stuff; thanks for sharing you findings!

Tash! Way to go!! Jonathan and I can't afford everything organic, but you can make wiser choices with foods that are not organic. Here are a few examples of things you may want to try for starters:

1. Look at the ingredients of things, ...jellies. One will have 14 different ingredients, the other will have like 3... strawberries, water, sugar. I try to do this with many items to cut out the unnecessary additives/ingredients.

2. Buying Hormone-free meat is a biggie for me as well...like the Laura's meat at Lowes (and target too I think) and some Tyson's has gone hormone free as well.

3. 100% juice instead of Juice cocktail has way less added sugar, even though it will still have sugar, since fruit has natural sugars.

5. Using real butter instead of margarine. Real butter has fat, sure, but you can look up what margarine is, and its no good.

6. You know we do organic milk, so that's obviously our choice. We moved to organic milk after my dad helped milk at a local dairy farm...He said the drugs/hormones they pumped into those cows was incredible! That was enough info for me...

Wow, I think I've typed enough. I too think you can find a happy medium between making some better choices and also keeping a budget. We sure aren't a 100% organic family, but I try to make wise choices where I know how to! Happy shopping, and I can't wait to hear how its going for you! Sorry for the long comment...you hit a hot topic!!

Tash, someone also mentioned the Stoneyfield plain yogurt too...this is a good one to look into. Flavored yogurts have a lot of added sugar, so the plain alone or with added fruits is a great way to go. We started Cana on plain yogurt as a baby and she still loves it just plain!! Plus, yogurt is great for their tummies!!

To maintain a budget for healthy eating- whatever money I save from cutting out the junk (chips, pop, candy, chocolate, etc.) I put it towards healthy foods.

I also try to buy some frozen fruits and veggies because they last longer than having fresh sometimes in the sense that I waste more money by throwing out rotting fruit than by always having frozen stuff available.

Oh, and replace ALL drinks with water- you'll save a ton!!!

I like using a blender better than a juicer. (at least my juicer) is soo messy! I hate cleaning it. Plus you put all of this stuff in it and only get a little to drink out of it.

Also I love the price of produce at Aldi! It's even cheaper than our Farmer's Market. I have been thinking about our intake of fruits and vegtables even more now that I am making baby food for our son. I usually buy the same thing for us to eat that I am pureeing for him. And as he starts eating table food I want to make sure I am building his immune system with good food. Congratulations on baby number three by the way!