Our family had a great day today as we closed out our year together (1).

The day was spent playing games (2), baking (3) and reminiscing about all that's happened this past year (4).  Josh and I planned a special activity with the kids to help them grasp the concept of New Year's Resolutions (5) and helped them write out their own plans for the next year (6).

Josh and I were able to squeeze in a little workout at the gym (7) while the kids played happily together in the gym childcare area(8).


Jude was having an abnormally great day (9).  Typically he knowingly pushes his siblings buttons (10) and frequently disobeys (11).  But today he was so sweet (12) and compliant (13) that we rewarded him with some sweet treats (14)!

And it was a good thing too, because we were invited to a birthday bash/New Years party at a friend's house and it would have been devastating to have to make an unruly Jude (and as a result, mom) stay home from the fun festivities (15) because of bad behavior.

We loaded up the car and headed to the party with smiles all around (16).  Fun was had by all (17a) (17b), but we couldn't stay out partying too late because we had Journey first thing in the morning.

It was so sweet to kiss in (24) the New Year with my best friend!

Here's to another year with our spicy circus of a Colony.  I wouldn't trade it for the world (25)!

3 - Rainy spent the entire afternoon in the kitchen baking yummy goodies for the neighbors because it's never too late to spread some Holiday cheer to the ones closest to us, right?! Right.  Merry Christmas Happy New Year, from theVia's

4 - Who am I kidding?!  I can't even remember where I placed my phone 5 minutes ago and I literally had to go look at my past blog posts to remember when Jude's birthday was this afternoon, so trying to remember what happened over this past year, yeah right. *sigh*

5 - Nope, we didn't.  As a matter of fact, that phrase never even escaped our lips, but I do remember the activity of cleaning up flour from every crevice of the kitchen after one of Rainy's aforementioned baking episodes... 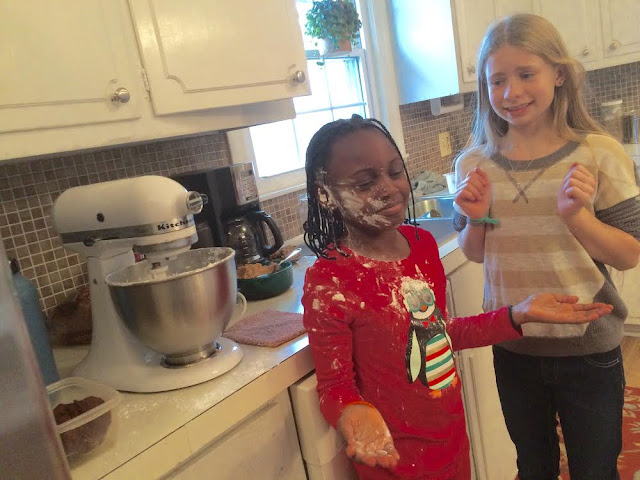 6 - Again, we're in a season of just making it through the day-to-day, so our long-term goals consist of nobody peeing on the toilet seat and picking up our toys for an ENTIRE DAY! Let's do this!

7 - If by gym you meant the floor between the living room where the Legos threw up in front of the cozy fire and the dining room where leftovers were being eaten, then yes. (I'll give you the first month free if you can workout under these conditions with me, ha!)

8 - The kids enjoyed some time playing outside swinging from our  ghetto  EPIC  tree house ledge in the backyard and pulling each other in the wagon between the free ranging chickens that Rainy was keeping an eye on (because our relationship with our neighbor is more important than our free ranging chickens).

10 - He was pushing everybody's buttons. ALL. DAY.

12 - He destroyed Lego creations and broke his siblings toys...just to name a few.

13 - We have a friend using our front yard/lot to sell their car (let me know if you're interested!) and we had instructed the kids not to talk to any people who came to look at the car.  But Jude did.  Because Jude.  And he told the guy, well, I'm not even going to write it because it was that inappropriate.  Because Jude. (Sorry Aaron, I hope you can still sell your car!)

14 - Jude was sequestered to his room for the remainder of the day because he proved that he was incapable of making wise choices.  Which meant that I, too, was sequestered to the house, so I wouldn't be going to the birthday/New Years party either.

16 - Poor Zeke was having such a hard time leaving Jude in the midst of consequences that he literally couldn't stop crying.  Just another reminder that consequences hurt more than the person who is being punished.

17a - I have the FaceTime chats and videos from my friends to prove it, ha!

17b - I ran through the songs for the morning and folded some laundry while I enjoyed the peace and quiet of my house (minus Jude's crying because he was missing out on the party).  It was kind of my happy place.

18 - I literally had to talk Josh into staying up for the ball drop with me because we have to wake up so early for Journey.  But I have pretty persuasive powers;)

19 - We had such a hard time keeping our indoor fire lit all day, except for the 30 minutes during my workout video, of course.

21 - Ok, so we DO have a middle schooler, but I STILL don't know half of these people!

23 - But for real, why do they feel like they sound better if they wear less?!

25 - For real, I truly love now.  I confess to the occasional eye roll and I certainly have my moments of huffing and puffing through exasperating parental moments, but I wouldn't trade it for the world!  Even if one of us didn't make it through to the ball drop;)