The Colony Goes To Get Ice Cream 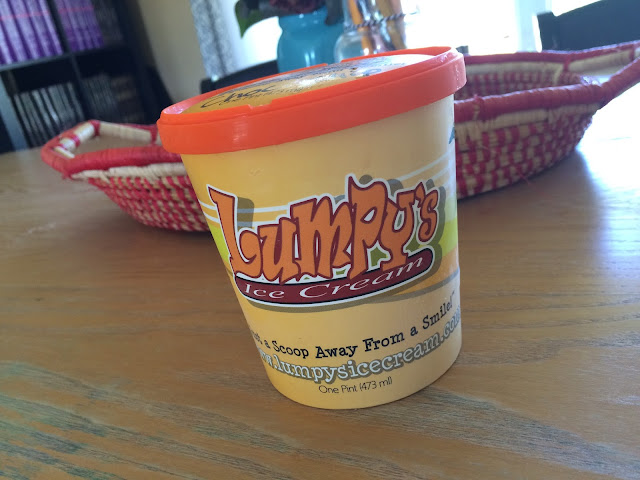 The Colony was so excited that Aunt Joy, Uncle Jay and baby Cohen decided that they wanted to spend some of their vacation time with us this past weekend!  And that's a big deal for a Cop and Special Ed Therapist with lots of capital letters at the end of her name that mean that she's pretty smart.

The excitement mounted throughout the week and by the time the kids went to school on Friday morning they could hardly contain themselves.  (Baby Cohen has already stolen their hearts;)

Friday afternoon and evening were lovely.  We played outside until dark and then we had a leisurely time getting the kids in bed, all while sneaking snuggles with the baby...because, how can you not?!

It was the beginnings of a great weekend.

Everyone slept well and woke up rested, except for one (or three) Colony members who will be left unnamed.

And then it began to downpour...literally, and we lost another couple of Colony member's happy hearts along with the rain.

I knew I needed a plan and needed one fast!  The technological screens were screaming for attention and I REFUSE to let them win!

We DID need milk so I made the mistake of mentioning that we would be taking a fun trip to Lumpy's Ice Cream (the story that brings joy and laughter) to pick up our local milk and we could all get some ice cream.  The story on the side of Lumpy's Ice Cream is about sheer joy brought to some kids by their dad who took them to get ice cream one day.  And that made the dad's heart SO HAPPY that he began his own endeavor to make healthy, organic, local ingredient ice cream for ALL to enjoy.  (It's a sweet story, and important later on in my story.)

Oh, the shouts of praise resounded as my children rose up and called me blessed.  I basked in my Proverbs 31 glory for that split second until the the bickering siblings started right back where they left off and the "I'm bored" chants began pounding through the halls.

It was time for baby Cohen to wake up and eat and I needed a shower.  Let's get these kids out of the house for a bit and maybe it will jump start this day.

By the time we were all ready to go, the rain had stopped and it was time for Zeke's baseball practice.
So ok, change of plans.
I'll make lunch and we'll take Zeke to practice and then maybe we'll go to Lumpy's (the store which brings joy and laughter to all) during practice and bring him back his favorite kind.

Well, as you can imagine, that idea didn't go over so well with the Zekester, so we wait.

Now, I have to pause here to explain something very important about the Colony.

Anything and EVERYTHING you say can and will be held against you.  For example, if Josh and I are going back and forth trying to verbally talk through something and mention, "go to Meme and Poppie's" the Colony kid who heard those words will yell throughout the house to start packing because we are about to take a road trip to VA immediately, when, in fact, Josh and I were really saying that last month when Josh took the kids to VA for a funeral they had seen Meme and Poppie.

They hear words and take them completely out of order and context and make up a reality in their own minds, spread the news like wild fire to the multitudes, and then we spend the next 47 minutes rectifying the situation by answering questions from 5 kids and wiping tears of disappointment for an event that didn't happen because it was never really even going to happen.

So, this is what kept happening all day with Lumpy's (the store which brings joy and laughter to all).  I'd try to map out a plan and it kept changing because of the day's events.  The kids were irritable, tween angst was rising (oh lordy, it has begun), kids were "accidentally" scratching their brother's necks (I mean, really?!).

But FINALLY it was time to pile in the car and go to the long-awaited Lumpy's (the story which brings joy and laughter to all).

I had barely stepped into the store when I saw the Mustache Man (the one who decided that joy and laughter must be enjoyed by all) holding a cone with a large scoop of ice cream on top and digging into another barrel to get another scoop to happily hand to Zeke.

Mission accomplished.  Joy and laughter was just brought to a child.  A child of a family who ALWAYUS ONLY gets the child size, one scoop kind of ice cream cone, because who can afford 7 adult size cones?  I quietly told Zeke that next time we really need to only pick one flavor please and turn around to Cai giving his two-flavor request because "Zeke did!".

I must pause the story again to explain that I don't really take my kids out to do this kind of thing very often without Josh, and Josh couldn't be around much this weekend.  For one, we don't have money to do it and two, well, my sanity would be in jeopardy and my children would be at risk of hearing words that they ought not to hear, ahem.

Ok, back to Cai.  I try to quietly explain that I didn't know what was going on until Zeke had already been served his ice cream, and that we just couldn't do two scoops for everybody and that he needed to choose one.

Meanwhile, the line began growing behind us and the Mustache Man got Jude his Chocolate ice cream, because no matter how many times (or how many people line up behind us WHILE he chooses) he chooses a different kind of ice cream, he always goes back to the ol' faithful chocolate.  Another successful joy and laughter filled child

I turn to check on Jude to make sure he was ok, and by the time I turn back around Cai had given his order to the Mustache Man.  He scooped the vanilla with chocolate chips onto Cai's cone, but instead of handing it to him he began to move down the aisle to another barrel to get another scoop of something.  I kindly told Mr. Mustache Man that we only needed that one scoop and Cai bursted into tears. I mean LOUD tears, people.  My face began turning all shades of red by now.

I turn to Alethia and ask if she wanted the vanilla with chocolate chip and OF COURSE she didn't.

I was stuck and not thinking clearly anymore.

After a second the Mustache Man said, "Oh no, we can't have tears, I'll fix it, just watch!"  He carefully scooped a tiny layer of what he thought Cai had asked for on the top, to appease Cai.  And then Cai began to WAIL!  He wanted the OTHER kind!

The OTHER kind?!
Like, those two kinds weren't good enough?
Oh.My.Gosh.

The Mustache Man looked heartbroken.  A crying child in his shop that was meant to bring joy and laughter...my heart hurt for the man.  He reached the cone out to one of his workers and she gladly began licking the yummy treat, because ice cream is SUPPOSED to make you happy and smiley.

Cai was graciously given another chance to turn his frown upside down as the Mustache Man handed him the "right" ice cream cone.  I can only imagine the color my face had turned by now.  I bent over to speak my disapproval to Cai and heard the Mustache Man tell Alethia that her flavor was an "adult flavor" and guess what kind she ended up choosing...yup, the vanilla with chocolate chips that she had smirked at just minutes before.

I was absolutely FUMING inside, between the waves of embarrassment and "I've got this!" self-preaching I was doing.

I looked around to see who was next and somehow Rainy had squeezed in the mix and came out with a two scooper too!

We had to get out of there and fast!

We got Joy and Jay out easily enough (because how hard is it REALLY to choose a flavor of ice cream?!) and headed outside to eat.

All of a sudden Jude falls out into an all out catastrophe cry, "I FORGOT TO EAT MY ICE CWEAM OUTSIDE WITH EVWYBODY AND I AWEADY ATED IT ALL!!!!!!!"

Outside, the kids were complaining that they were cold, they were playing with the table umbrellas and walking, yes W-A-L-K-I-N-G on top of the outside tables.

*I'm about to lose it.  I cannot contain my emotions anymore.*

I turn to Jay and Joy and try to cover my face with my hair and whisper that I was just going to go ahead and take my kids on home and they could come whenever they were ready.

But somehow a tear slipped out in mid-sentence and then the floodgates were opened!  I could no longer stop them.  Joy wrapped me in her arms to help shade my shame as I heard a voice happily yell my name behind me.  I sweet family I hadn't seen in forever had recognized our kids (probably because they were WALKING on top of a table!) and wanted to come say hi.

I turned around, speechless and evidence of ugly cry all over my face, ha!
I apologized and told them I was just having a mommy moment.

Joy handed me baby Cohen and instructed me to get in the car with him and take him on home and she and Jay would get our kids.

I cried the entire way home.  And then laughed because of what I was crying over, and then cried some more, just for good measure.

I'm not sure what their Aunt and Uncle told them, but upon arrival the kids all came up to me and thanked me for letting us do something fun like go to get ice cream and told me that they needed to clean up and then get showers and baths before bed.

Oh, this family I've been blessed with has a way of stretching me farther than I think I can go, but God is so good and reaches out a hand right when we need it (thank you Joy!).

And next time we head to Lumpy's (the store that brings joy and laughter to all) I will be giving instructions on appropriate scoop allotment and table manners before heading in!

Email ThisBlogThis!Share to TwitterShare to FacebookShare to Pinterest
Categories: Not Me Monday