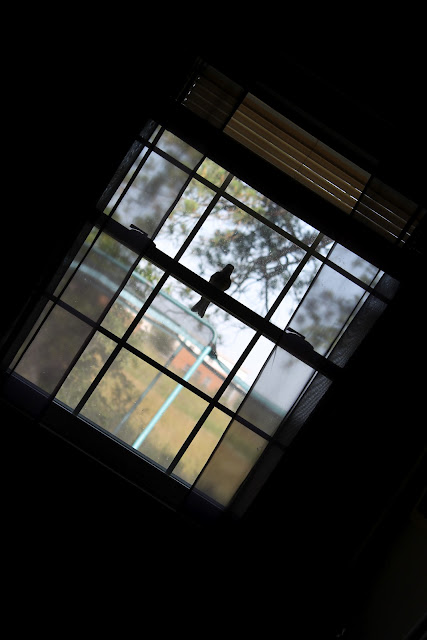 Every morning he comes to our house.

Every morning going on about 2 months now.

Although, we thought it was the kids playing at first.

But quickly realized, after rushing their room one morning,
fire blazing, that they were sound asleep:)
WERE, being the emphasized word.
Woops.

But then we saw that bird.

At first he would wrap his little feet around our screen on the back porch.

Pecking on the back window/door.

Flying into the back door.

We'd quickly shoo him away and he'd go to the front bay window.

Even with the curtains closed.

Josh decided that enough was enough.

He went outside and hung a blanket over the window.

That will show him!

He won't be able to hang on to anything or peck through the blanket.

That didn't stop him, though.

He just moved over to the kid's bathroom window.

Stupid bird!
Posted by The Via Colony at 7:37 AM

Email ThisBlogThis!Share to TwitterShare to FacebookShare to Pinterest
Categories: Misc.

You remember that annoying woodpecker that used to peck away at our metal chimney in Charleston?

Oh wow, I'd forgot about him! Now THAT was a stupid bird, ha!