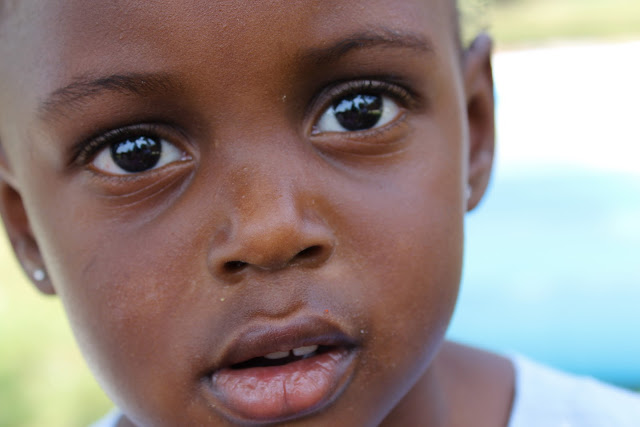 Uganda was so good for our whole family.

I believe Alethia grew leaps and bounds in her trust in us as parents and as a family.

We had very few bumps in the road to our attachment and bonding.

The initial response to our family was timid, and then for some reason after a few days she became scared of Josh.  Their relationship had a rocky couple of weeks but we worked through it and their relationship has never been better!  She is his little shadow:)

Then there was the moment that will forever be engraved in my mind. The moment Josh had to pry my screaming and crying new little Ugandan daughter from my arms at airport security, not knowing if I'd ever see her again.  I can't even imagine what was going through her little mind at that moment.

My heart hurt.  It ached.  There was love there!

Then we got the email stating that her VISA had been accepted and she was coming HOME!

Home to America, to spend her life with her new Forever Family.

There was love and excitement there.

I had no reason to fear that we would have any bonding or attachment issues.

Her transition into life in America seemed seamless.  She knew her siblings.  She knew mommy.  She knew daddy.  She'd seen plenty of pictures of her new home.

Now, I'm not saying it wasn't a bit overwhelming for her, but she adjusted just fine.

She was always quick to warm up to anyone that she saw the rest of us trust.

And then we went on with life, finding our new normal.

Fast forward a couple of months.

Out of nowhere Alethia began acting out.  It went beyond just normal 3-year-old behavior.  Lying, biting and screaming out in defiance were at the top of her game, and pushing away, ignoring and conditional love were the responses at the top of mine.

Every stage up until a couple of months ago was just the "natural" love that you give a hurting child.

I have loved Alethia since I laid eyes on her in October of 2010.  I have loved the process that it has taken to make her mine.  I have loved seeing her grafted into our family.  But I had yet to step into the kind of love that she needed and desired from a mommy.

I hadn't proven myself.  If anything I was pulling her farther and farther away from where we needed to be by the lack of attention I was giving her.

Josh and I prayerfully decided to call on a friend of ours who specializes in bonding and attachment issues/disorders for adoptive families.  After a little family catch-up we dove right into the issues of our appointment.  I wasn't two sentences in when the gentle nods and understanding smiles began to come.

She ever-so-sweetly told me that Alethia has a clear case of attachment disorder.  The sure sign being the lying in particular, as well as the other defiant behaviors.

She explained it like this:
Most of the time there is a "honeymoon" period, typically about 3 months.  After that period the child often begins testing limits and finding his/her place in the family.  The fact that she is the "new" child, but not the baby can really cause some tension (she is out of birth order in our family).  Add in the fact that we did just add a baby.  Here's the kicker: the one the child normally acts out toward is the mom, no matter what her history is with each of them individually.

Looking back I see that I have been less-than proactive in creating that bond that she needs to complete that grafting.  I've been trying my hardest to treat her like my other children but lacking in the balance she needs to feel the individual love that she's needed and desired, yet has been unable to attain before coming into our family.

See, as much as I say that I'm Alethia's mommy and think to myself that I'm Alethia's mommy, I am NOT her mommy!  We have no foundation.  If she lies to me she could care less if she hurts my feelings because we don't have what that takes yet.  And quite honestly I could care less that she was hurting Jesus with her disobedience and more worried about how she had offended me.  If she is defiant it's because she wants a reaction from me.  She wants to see if I'm going to love her through it like all my other kids, not looking at her as if to say, "Uh-uh...no she didn't!".  By acting this way she is basically just saying "Yes, I did just do exactly what you told me not to do.  What are you going to do about it?"

I do believe that we are ALL born with a sinful nature, and I'm not dismissing that, but I don't believe that this is solely what this behavior is.  I believe that this is just how she has been forced to live like for the past 3 years of her life.  She's had to have a backbone. She's had to fend for herself.  She has to get her needs met, whether that comes from the lady she calls "mommy" or from the teacher in her class on Sunday mornings.

This part of adoption is personal, but in my opinion, kept all too quiet.

I feel as though there is this unsaid expectation to automatically have this bond as soon as the child enters into their new "forever family".  But for many of us, it is a bond that has to be created!

And this is NORMAL!

So many relationships in my life just come naturally to me.

My husband - we dated, we fell in "like", we got engaged, married, made little people together, and daily choose to live this life together.

My biological children - first conceived, then they grew inside of me for 9 months, creating an unbelievable bond that cannot be separated, then were labored out of more pain than one could ever think was tolerable, but made so worth it when you look into those eyes for the first time.  Then you stare at them for hours on end and hold them close as they nurse, sleep, roll, jump and smile back at you.

But now...now I have a relationship that I have to fight for on totally different levels.  All of a sudden there is a little brown-skinned 3-year-old looking me in the eyes.  She calls me mommy, but only because she is told to.  There is no movement in my belly that makes her mine.  That privilege was given to another woman.  There is no infant or even toddler period where I just sit and stare into those big brown eyes.  There are 3 years of her life that are non-existant to me.  She smells different than my other children.  She talks different than my other children, and I still catch myself making faces when I have to pick those little boogies out of her nose:)

Most people won't write about this side.  The feelings.  How they have to move beyond bringing a child into their families and giving them a "forever family", to stepping into the life beyond that!

I am BECOMING her mommy...more than just the lady she calls "mommy".

I would never want Alethia to read this one day and interpret the post as saying that I did not love her at this stage. On the contrary...I want her to see how hard I am committing to work to gain her trust and her love!

I've got 3 years of bonding that I have to make up for.  I'm ready to get started.
Posted by The Via Colony at 3:57 PM

Thank you for being so honest about this process Tasha! I am praying for you and I'm thankful to learn a little bit along the way from you!

Thank you for your honesty. I saw exactly how this can also relate to a step-child relationship, and as a step-mom I can say I have been through so many of those same emotions. Thank you for saying what many have to work through, but are too scared of what others will think to say it aloud.

Tasha - I'm friends with Beth Williams and she sent me this blog post. THANK YOU for sharing!!! We adopted 2 little boys from Rwanda a year ago and SO much of what you say is SO true! It's so nice to hear someone SAY these "hard" things...the word "love" has taken on a whole new meaning to me this year, that's for sure!

I'm so thankful for all of you who have commented so far! I know I'm not alone, but it sure helps to hear of others who are dealing with the same things:)

Thanks for posting this and thanks for your honesty. My husband and I want to adopt at some point and things like this is what I worry about. I'm so glad that you are brave enough to say what you are feeling.

Very excited for you and your family, and the steps you are making with your relationship with Alethia. Great job, Mommy!

Beautifully written and even more beautifully lived! This is the good fight of faith for you and it's just that. GOOD!

Thanks for sharing this.

Well...you know I get this one, ha! You are so right in all that you said, and I love that you are being honest while respecting Alethia's heart.

I have caught myself on several occasions just staring at Eli, thinking how cute he was. I know the significance of this isn't lost on you. I know you will get there with Alethia. Love you!

I will be praying for you! When we first got the boys (at 8 mo old) it took a long while before we bonded with them. Isaiah especially was shell shocked from his move from his previous foster home to ours and he shut down for about a year. I loved them and they liked us, but they were not solidly attached and it took a while for that love and attachment to develop.

Now they are well adjusted happy (with special needs) 3 year olds. We have come a long way in the 3 years. Its been a journey.

I will continue to pray for you.

I also want to say, we were placed with a 6 mo old 4 months ago. He's a doll and the happiest, sweetest, cutest baby. But I know we aren't attached yet. I like him a lot. I say I love you. And I do. But we havent gotten that bond yet. I know it will come...its just not there yet.

Right there with you;) Thank you for your honestly and making me feel like I am not alone in how we are transitioning as well.