Many of you already know this, but we have a very special boy on our hands.  Well actually, we have 3 special little boys, but one little colony member, in particular, is very complex and emotional. 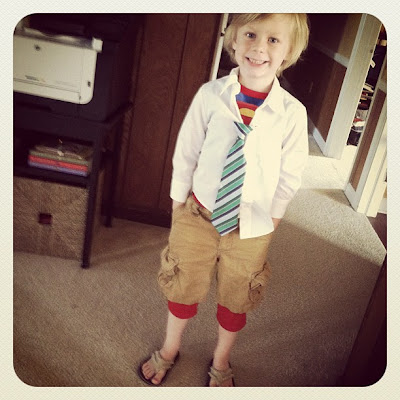 For the past few months we have been taking Zeke to a couple of Psychologists to  narrow down what the root of his issues might be.

At first our minds were reeling at the realization that he may have Aspbergers or Autism.  After a series of testing we were told that he may have some Autistic tendencies and learning habits, but we can rest assured that we are not going to have to walk down that path.

We are now going down the path of learning disabilities ranging from Dyslexia to delayed cognitive recognition and processing disorders.

We have a lot to pray through as we decide the right steps to take to get him the help he needs.

But that doesn't explain the extreme emotional outbursts and sensory issues that erupt inside (and a lot of times OUTSIDE) Zeke's little body.

These issues stem from anxiety.

Wow, our little almost-6-year-old has an anxiety disorder.

It shouldn't come as a surprise to me, seeing as I battle anxiety on a daily basis, and have since I was (at least) 4!

Zeke's anxiety triggers some of his learning problems, extreme emotional outbursts, fear, obsessive tendencies and many other facets.

When I would initially observe his temper tantrums or "freak-outs", I would just stare at him in disbelief, wondering how in the world such a sweet, loving little boy could flip a switch so instantaneously to act like this.

Then we find out he is struggling with the same inward battles I struggle with every day, but it is exacerbated on an even higher level...it's a wonder he can hold it together as much as he does!

We ALL have our own ways of "freaking out", don't we?!

We may not stomp our feet and scream, running around the yard like a chicken with our head cut off (or maybe I you do;), but when this weary mom let's her guard down and allows impatience to set in I can raise my voice with the best of 'em.

I am realizing now, more than ever, that I need to be the calm in his storm.  I need to exemplify the restraint and self-control that only God can offer.

I need to quit my 33-year-old temper tantrums and mom-up.

We are going to get through this together!
Posted by The Via Colony at 9:30 AM

Have you considered an amber necklace for Zeke? I got one for Jacob after you recommended them and then ended up getting one for me. I can tell a difference in my anxiety/depression if I stop wearing mine.

Each time I visit your blog in the coming days, I will make this a matter of prayer. Psalm 55:22

Praying for you all, that the Lord will be your peace and that He will guide you to the best treatment for Zeke.

Our 11 year old (who was adopted from foster care at 6) has anxiety and ADHD. I know how frustrating it can be but we went the medication route and it has made such a difference!!! I'll be happy to discuss with you if you want to email me (epatterson22@yahoo.com). Prayers for you all!