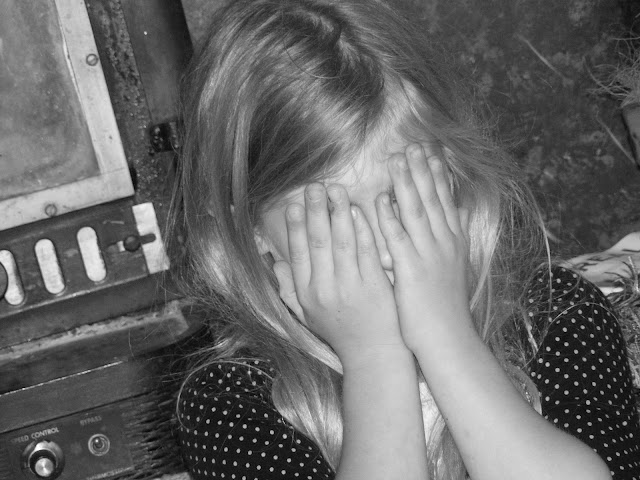 The topic of modesty comes up a lot in our house, especially with two little girls who LOVE make-up and don't even get me started on the revealing princess costumes that they prance around in.  We are trying to teach our children at an early age what is and is not appropriate to watch, wear and do.

This isn't just something we talk about all the time, we put it into practice on a daily basis around our house and in our lives to exemplify what that looks like to our kids.

We already know that we can fall into any of these sins at any time, so don't get me wrong.  I'm not saying we have it altogether, but more so that we realize the gravity of the situation and are putting up protective barriers and doing everything we can to safeguard our family and marriage.  We believe that if we have no parameters for what goes into our minds then we are just making a larger foothold for Satan to use.

All of our electronic devises are setup with Covenant Eyes.  (If you do not have this software, or something similar to it, you need to make that a priority.)  We also have passwords on Josh's iPhone and the kid's computer that "only mommy knows".  The kids don't question it anymore, as we make it a point to talk about protecting what our eyes see.

Over the course of the past couple of months we have really noticed that Zeke, and especially Areyna, have really grasped this concept.

One day when I was in the grocery store with the kids I caught Areyna turning magazines around in the grocery store.  I knew what she was doing but I wanted to see what her reasoning was behind it:)  She told me that the pictures on the cover were inappropriate and then asked why people would put those kinds of pictures of themselves for so many people to see.

On another trip to the store, we were going down the personal care aisle and all of a sudden Areyna paused her conversation with Zeke, looked over at him, and started shielding his eyes.  There was no dialog between the two at all and it only lasted a second.  Then Areyna took her hands away from Zeke's face and he nonchalantly told her "thank you", and their prior conversation picked right back up where they left off.  As we kept walking down the aisle I realized what was going on.  We were in the shaving section and some of the shaving cream bottles had naked ladies on them and Areyna was protecting her brother.  What was cool to me was the fact that Zeke didn't freak out because Rainy's hands were all over his face, because he knew EXACTLY what she was doing and he thanked her.

This softening of Areyna's heart could only come from one source, and that is the Holy Spirit!

She is showing this softening in other areas as well.  Areyna has been reading her Bible to Alethia in the mornings before I get them up.  They'll even talk about what they learned with me.

Conviction for acts are really beginning to set in.  I'll find her sitting quietly after being reprimanded for something and then she will come to me (sometimes hours later), in tears, to apologize.

When the kids were setting up their yard sale for their cousin a few weeks ago I realized that she was "selling" toys that she really had been playing with.  When asked if she was sure she wanted to get rid of them she looked at me and told me that they were inapropriate, because the Barbie clothes and dress-up clothes revealed too much skin:)  I can't argue with that!

I have loved seeing this softening and this guarding of their hearts.  It starts here, in the home, when they are young.
Posted by The Via Colony at 9:38 AM

I love this Tasha. Your children sure are learning from you and Josh. Thank you for being sure a great example for them. Teaching begins at home.