Because I Now Know Its Value

I've been reluctant to post this, but I feel like it may help some of you out there who are going through this same thought process as I was.  So, here goes....

When I was younger, like middle school, I think, I was Baptized by a family Pastor friend.  My brother and I actually shared this moment together.  It was special and I knew exactly what I was doing.  The Pastor counseled my brother and I before-hand so we knew what to expect and so we realized what exactly Baptism was.

But, I was very young, with little life experience.  Just for laughs (and to lighten the mood a little bit) let me tell you just how young I was.  I was just hitting puberty and had begun wearing a training bra.  But, on the day of my baptism I had forgotten to put it on and I was so embarrassed to tell my mom that I needed to go back to the house to get it, that I was left thinking of ANY excuse to make it back to the house without anyone knowing.  Have I ever mentioned that I am SO glad that I am done living in those awkward middle and high school years, ha!

A couple of months ago, at the end of every service our staff began announcing about our Worship night that would be coming up and that we would have a time to "Go Public" and come forward to get Baptized.  I don't know why I felt a tug at my heart, but the feeling got stronger and stronger each week as I stood up on stage listening to the end of service announcements.

One week, after church, I brought it up to Josh to see what he thought.  He was in full support, giddy almost, when I told him that I needed to get re-baptized.

Well, the Worship night rolled around and I wrestled with the thought all day.  In fact, I intentionally walked out the door without an extra pair of clothes, thinking that the feeling would just go away if I didn't have clothes to change into.

In fact, as soon as I saw Pastor Paul and Pastor Jimmy at the front doing their sound checks, my body became shaky and I began uncontrollably crying.  I walked up to them and asked what they thought about re-baptism and told them my story.

Pastor Jimmy went on to tell me a story.  I don't remember all the details so if it's a little inaccurate, bear with me and just focus on the main point.

There was a young boy who had a very precious jewel.  He knew it was precious, as much as a little boy could comprehend such things, and decided that he wanted to give it to the Queen.  As the boy got older he became more and more aware of just how precious that jewel was.  He began to inquire about it and went back to the queen and asked for it back.  The Queen couldn't refuse, but was reluctant to let it go, because she knew how much it was worth.  As she offered the jewel back to the boy, who was now a man, he took it in his hands, and re-offered it back to the Queen saying, "because now I KNOW it's worth."

See, he really did gift the queen with a precious jewel as a child but didn't exactly know the worth of his sacrifice until he got older.

My first Baptism counted.  It didn't not work...it's just that now, after years of life experience, foolish choices and now choosing to walk with the Lord and seek His ways I know it's worth.

And what better way to set that right in my heart than to go public...again...in front of hundreds of people.  Talk about getting out of my comfort zone:)

And wouldn't you know...Journey just happened to have some clothes for me to borrow so I could take this step of obedience... 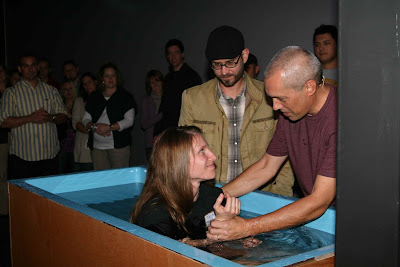 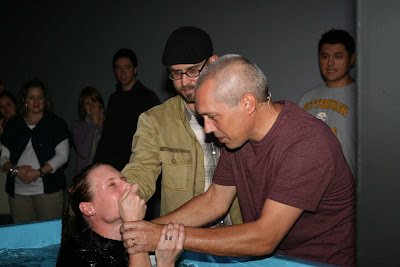 So, if you are feeling that tug at your heart but feel like you've "already done it" don't be scared.  Don't discredit your initial public moment, but move on in faith and obedience clinging to the fact that you now know its worth!
Posted by The Via Colony at 8:14 AM

i'm so proud of you!

Good for you! Kyle and I have had these discussions as well. We've both been baptized, but now we ... well, you said it best. We know what it means; what it's worth.

I was baptized as an infant, but 4 years ago I had the privilege of being baptized with Britty in front of our church - the best decision I ever made - so happy for you!!

Tasha, we are so proud of you. Rick and I have a story too.
When Rick was 28 and I was 24 we were discipling a young couple who had been recently saved. During our time together, we were talking with them about the importance of "believer's baptism." After our new friends had left, we begin talking about baptism. We both realized that neither of us had ever been baptized as believers. (Both of us had been baptized as a young teen). So several weeks later we were re-baptized together as believers in Jesus Christ. It was a very special time in our lives. I was also 8 months pregnant with Josh. So, Josh, we never told you but you were baptized as an infant. HA!

Thank you. This post has been a tremendous blessing to me today, and your obedience to Him is so inspirational.

I was also baptized at a young age and often wondered as you did.

I pray you are blessed today in a most special way.

I love how honest you are. Someone will truly be inspired by this. You are amazing.

this is so random and awesome. i have been feeling God tugging at my heart lately. my story is the same as yours and i have been battling with coming forward to recommit my life as not just a Christian but as a Christ follower. I have always believed but never walked with God on a daily basis. your post confirms today what i have been praying about for the past month. so thank you stranger and my sister in Christ, for the push i needed.

This is awesome! My husband wanted us to get baptized together shortly after we were married. I had already been baptized as a teen, so I struggled with this as well. I'm so glad God spoke to you and to me :)

What an inspiring post! Sometimes we forget how important baptism is because it is done while we are young. What a brave step you made to cement your faith to yourself.