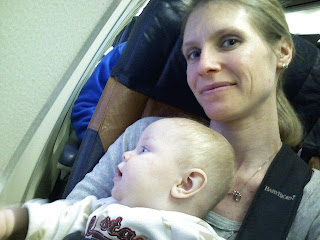 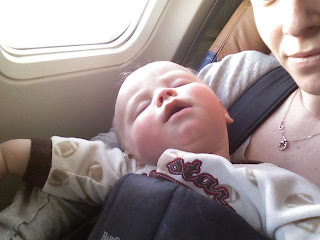 I was a little worried about how Micaiah would do on his first airplane ride. We had to get him up at 5:30am and we had a 4 hour direct flight to Denver to make it to my Uncle's funeral at 1pm CO time. He did SO good! I did add a few more feedings yesterday with the time change (and lack of naps). I had no idea what meal I was feeding him so we just went with the flow and he did amazing=)

I kept him in the Baby Bjorn during the whole flight and he just sat in it like a car seat and took naps throughout the trip. When we stood up after the flight the people in front of us said, "I had no idea there was a baby behind us!" and our seat partner was really sweet to him!

So, it was a success! Hopefully the ride home will be as good=)
Posted by The Via Colony at 1:24 PM

Email ThisBlogThis!Share to TwitterShare to FacebookShare to Pinterest
Categories: Micaiah

Of course he would do great...he is such a sweet and amazing little guy!

I'm sorry for the circumstances, but I hope you have enjoy this unexpected visit with your family.

Great job, Cai! You did an amazing job with him, Tasha. Glad to hear you all arrived in CO safe & sound :)