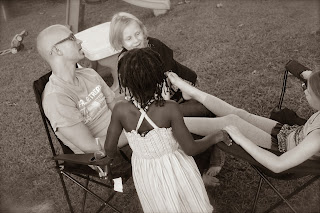 Rainy:"So, I have a list in my book bag of things to do instead of drugs."

Me:"Zeke you need to sift through those clothes and put them where they belong."
Zeke:"Some of them are dirty.  You know how I can tell, mom? I can smell them and know if they need to go in the dirty laundry!"

Zeke:"Dad, somebody at Journey told Alethia to marry him!"
Josh:"What?!  You told him 'no', right?"
Cai:"Yeah, you's too little to get married!"
Alethia:"Yeah, I told him 'no'."
Josh:"Was he black or white?"
Alethia:"He was white."
Josh:"Well, you know it doesn't matter what color his skin is, as long as he loves Jesus and adores you!"

Zeke:"My teacher's son just turned a teenager, but she said he was a nice teenager.  Why are sometimes teenagers mean?"
Me:"Well, sometimes teenagers are just trying to figure out how to make their own decisions and a lot of times their choices are the foolish ones."
Zeke:"Were you a mean teenager?"
Me:"I wasn't really a mean teenager, but I definitely didn't make wise choices."
Zeke:"Why?"
Me:"I don't know.  I guess I just thought it would be more fun to do the stupid stuff, but I made Nonnie and G-daddy cry a lot because it always hurts a mommy and daddy's hearts to see their kids make foolish choices."
Zeke:"Did Nonnie have to yell at you?"
Me:"Only 'cause she was frustrated and sad.  But mostly she just cried."
Zeke: after a minute of grasping this conversation in silence "I'm really glad you aren't that person anymore, mom."
Me:"Me too buddy. Me too."
Posted by The Via Colony at 7:51 AM

Email ThisBlogThis!Share to TwitterShare to FacebookShare to Pinterest
Categories: Words Of Wisdom