Oh, That Kid With The Cape? ~ a Zeke schooling update

I just got back from a conference with all of Zeke's classroom teachers, principals and special resources teachers.

They kept talking about this little boy.

They were remembering when he began at the school just one year ago.
He had to be wrestled out of bed, then wrestled to the breakfast table, then wrestled out of the car, then wrestled down the hallway to his classroom, then fought anxiety with every single transition throughout the day.
He was timid.
He was shy.
He was fearful.
He didn't know his letters.
He couldn't even count to 10.
Writing his name was even difficult for him.

But now...
...now he's the boy who is a joy to be around.
They can't get him to stop telling his cute stories.
He can determine what mood everyone in the room is in upon entering because of his sensitivity.
He has tons of friends.
He LOVES science and is beginning to read.
He can count to 100 by 5's AND 10's.
He still writes backwards and upside down, but he doesn't do it without a fight to get it right.

This boy is known for,
playing hard
wearing a cape on the playground every day (we still aren't sure where he hides that thing throughout the day and this is my first time hearing about the caped boy at school)
wearing his coat for security
guzzling water from his water bottle all day
He is known for laying hands on his friends and praying for them if they are sad in class or get hurt on the playground.
telling stories to avoid doing work
putting his hood on so he doesn't have to read
slinking down in his chair so that the only thing his teacher can see is his head
doing work with his feet in the air and twisting around his chair in circles

If anyone at the school refers to "the kid with the cape" his teacher's know, "Yeah, that's Zeke". 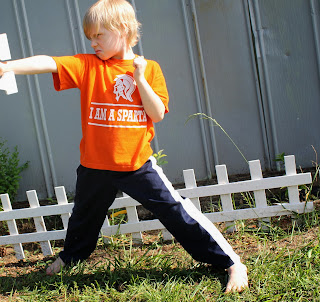 Oh, you wanna know who that boy with the cape is?
Yup, that's MY boy!
Posted by The Via Colony at 9:41 AM