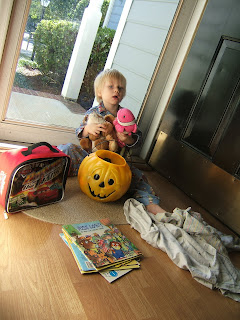 Yesterday morning as we were getting the house straightened up for the inspection Zeke began frantically gathering ALL his favorite belongings and trying to carry them in his arms.  He was absolutely beside himself, dropping one thing after another, because he just couldn't seem to hold everything at one time.
After several minutes of this he began whining and crying.  The whining and crying has been an on-going thing over the past couple of months so I automatically began to reprimand him for his bad attitude and sent him to his room, I just didn't have time for this.  He then began screaming and really carrying on.
We were running out of time before the inspector was to arrive and we had to be GONE so I continued to "get ready" and Josh went in to deal with Zeke.
This is just another reason why Josh is such a wonderful dad.  He will get to the heart of the issue, no matter what is going on!
Here's the thing, ever since we put our house on the market our lives have been in constant transition with no routine or predictability.  This has slowly been wearing on Zeke to where he could no longer take it.  To add to it, we have been leaving our house for complete strangers to look at, to inspect, to fix, etc. and each time we left, Zeke would go around and gather all his favorite things.  It wasn't until today that we realized why.
Zeke believed that those people were going to buy our house and that we weren't going to be coming back or that we would come back to all of our things GONE!  His animal friends...gone.  His bubbies...gone.  His guiyars...gone.  His lunchbox full of stuff...gone. His pumpkin pale full of even more stuff...gone.  I couldn't stop from getting tears in my eyes.  I just hurt for him.  I hurt for him, because I knew exactly how he was feeling.
I was that exact same way every time we moved with my family growing up.  I would literally get sick every time our house would start filling up with boxes, not knowing when I was going to see my stuff again and not knowing where we were going.  Too many unknowns.  (Don't get me wrong, I had a great childhood and looking back now I am so glad we had so many opportunities in so many different places)
As a matter of fact, I'm STILL like that, except this time I know (or will know as soon as we find a house...sigh) where we're going and that we'll see our stuff again.  Now it's the inspection that shows that we need to replace the roof, the buyers loan that hasn't finalized yet, meaning that the contract could fall apart at any time, and all the details of our personal lives not to mention the ministry, that I have to deal with.
Even as a believer, knowing that God is in control (not me), that His way is perfect, that He has our best interest at heart, that He knows what we need and when we need it, that His timing is perfect, it is still hard to live that out sometimes in the thick of it.  But this is my time to grow in my faith and persevere.  James wrote:
"Consider it pure joy, my brothers,
whenever you face trials of many kinds,
because you know that the testing of your faith
develops perseverance.  Perseverance
must finish its work so that you may be
mature and complete, not lacking anything."
So, I need to choose, right now, what kind of example I am going to be for my sweet boy.    He doesn't need to see his mom all stressed out over things that are out of my control anyway.  He needs to see me living out my faith even when it's hard and so many things are uncertain.
Posted by The Via Colony at 8:46 AM

I find myself getting very unnerved by unknowns these days too. I worry over things that used to never keep me awake at night and long for that person I was in college, so laid back and even keeled.

It's good that you are able to relate and understand Zeke and help guide him through those feelings. What a Mommy! Good luck with all the house stress. I'll say a prayer for you all.

Thanks for the response re: breastfeeding and sleeping babies. It's very hard for me to hear her crying and especially leave her to do it for 30 minutes. I feel like I'm abandoning her and that she's going to think that of me. Being a first-time Mama has given me a new set of insecurities. :\

I appreciate your help though and will check that book out. Thanks again!

Poor little guy.. so sad when we realize what the "heart" of the issue truly is in their lives. I don't know how you are doing it with 3. Routine is one of my necessities these days. At least it will all be over soon and you are moving to a great place!

I stopped right away and lifted you, Josh and the children to our Savior.
God is ALWAYS faithful and if He knows the number of hairs on our head and is concerned when a sparrow falls from its nest, then I know He will care for you among all the changes in your lives right now. Just be encouraged today in the Lord.
Love to you all.

A great post. I will say a little prayer for you and your family right now.