Preparing For The Blowout! 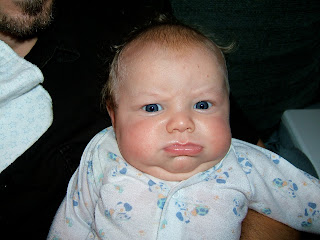 ***Consider this your warning - if you have a weak or sensitive stomach read no further!  This post is messy=)***
The week before we moved to Raleigh I noticed that I had not changed a poopie diaper in almost a week.  I thought poor little Cai's tummy must just be out of wack because of the move.  Every nursery or place I'd drop him off at would tell me that "We thought for sure he had a dirty diaper and checked him several times but there was nothing.  He just smelled SO bad!"  Inside I was thinking to myself, just look who his daddy is though;)  Don't tell Josh I just said that, HA!
Well, sure enough on Saturday afternoon (loading day) he had a massive blowout!  Thank you G-daddy (my dad) for changing that one.  It was so funny...for the next several hours Cai was SO content and it was like he just couldn't stop smiling.  I'm sure that one felt good.
Fast forward a week later with no poopies.  The nursery workers are complaining of this horrendous stench coming from this sweet little bundle and I know we are in for a doozie!
I was preparing dinner for our family of 5 children and 4 adults (don't worry, Jenn and I took turns cooking for this crew) when I smelled it!  I looked down at the bouncy seat where Cai was staring into outer space with an intent look on his face and realized that it was time.  Not 2 minutes later I looked back at him and IT was coming out from every imaginable angle.  I just stood there not knowing which action to take.
After that episode he waited until the following Monday for another poopie escapade.  I have since dubbed Mondays as "Poopie Mondays".
I am a little worried this week though.  Monday has come and gone and it is now Wednesday.  We are about to embark on a road trip to VA and Cai has yet to have his weekly blowout.
We are heading out prepared with a waterproof pad in his car seat and easily accessible wipes, diapers and vomit bag (when the smell begins to make it's way to the front of the car)=)
Side Note:  He isn't constipated, he just doesn't go.  We've tried a little apple juice to no avail.  Any ideas?
Posted by The Via Colony at 11:52 AM

Email ThisBlogThis!Share to TwitterShare to FacebookShare to Pinterest
Categories: Micaiah

Trey had issues also, and when he was about 6 months old, his pediatrician suggested adding 1/2 tsp Miralax to one of his bottles each day. It did help - we used it off and on as needed and still do. The doctor's words were, "This stuff should be added to the public water supply." Just an idea.

I'm glad we're not the only ones that talk so freely about baby poopie! Unfortunately, I've got no ideas for ya :) A lil' prune juice maybe?

Put 1 Tbs of Caro corn syrup in his bottle at the next meal time. Works like a charm. We've used this twice when Eliana was stopped up. 12 hrs later - all clear!

I would of course suggest things like the caro syrup for an occasional clog :) haha but it might be that his little tummy "bugs" are out of whack. Acidophilus is the good bacteria found in yogurt and it comes in powder form. You can find it in any health store (get the refridgerated kind in powder form so you can easily mix it with water or breast milk). Acidophilus is pretty much good for everything. When Jedi was born he was on antibiotics in the NICU which messed his digestive system up big time; he had the worst diaper rash they had ever seen. It didn't go away until I tried acidophilus b/c it got his system back in check.
BTW his face is priceless in that pic!!!!

I agree with the tummy "bugs" prescription :)

Have you tried pear juice...everyone I know says it works!

Oh yes, know all about this problem. I started Abigail on 2 ozs of Pear Juice every day at this age. I would give it to her first thing in the morning, so I knew she got it. Once she started eating foods this has gotten better. My doctor said a baby was constipated if he did not go for three days. Who knows every doctors seems to say something different when they are this age. Let us know how things go!

same here... mary only goes about once a week and when she was cai's age it woudl sometimes last 10 days. she was never uncomy. The dr. just said bmilk was really easily absorbed similar to water.